AKRON, Ohio – (December 15, 2008) – Alec Pendleton decided it was time to put a new roof over his head and those of his long-time employees. 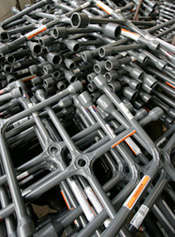 But the owner of Ken-Tool, a small tool maker that specializes in truck tire repair equipment, wasn’t thinking so much of making changes to better keep rain, snow and other harsh weather outside.

Instead, an ongoing expansion project and related renovations at the small, 87-year-old Akron manufacturer are aimed at helping the company perform better in an ever-more competitive world.

Even with the recession that has hit manufacturers particularly hard, the $2 million project, which is a big deal for a company this size, looks to be money well spent, Pendleton said.

The expansion traces back a couple years, in part to Ken-Tool’s need to consolidate shipping operations from a North Ridgeville facility into the Akron headquarters off North Street, along the banks of the Little Cuyahoga River.

Bringing in the shipping department was going to be a difficult fit at the aging Akron plant, Pendleton said.

”The second, frankly more important piece of the puzzle was, it becomes clearer all the time that in order to survive in manufacturing in the United States today, there’s no alternative but to be excellent,” Pendleton said. ”And, for a variety of reasons, we have fallen behind the times in manufacturing techniques and technology. I was quite determined that in order to survive and prosper, we needed to become much better manufacturers than we were.”

It’s not that Ken-Tool wasn’t doing well, or wasn’t well-respected in the marketplace.

”One of the secrets of Ken-Tool’s success is we are highly regarded specialists in a very narrow niche,” Pendleton said.

The recession has taken its toll, though. The company several weeks ago was forced to lay off 15 workers, bringing employment down to 60.

Ken-Tool’s niche is designing and making tools to remove truck tires from a mind-boggling array of wheels. Another product line is aimed at the U.S. military: rescue tools that are stashed on ”up-armored” Humvees. The added 1,000-pound-plus armor, newly installed on Humvees in Iraq after stinging criticism that stock vehicles offered little protection, can trap people when the vehicles are hit with explosives or roll over. The tools are used to quickly rescue anyone pinned inside by the armor.

It’s unlikely that what Ken-Tool makes will become commodity products that can be cheaply turned out in a factory in, say, China, Pendleton said.

”My strategic decision was, let’s focus on what we can be better at than anybody else in the world,” he said.

But that didn’t appear likely in the company’s existing facility, which Pendleton referred to frankly as ”an industrial slum.”

Options included relocating, either nearby or out of state, he said. Moving far away was ruled out for a number of reasons, including the cost and disruption associated with packing and shipping equipment that weighs as much as 80,000 pounds, the need to keep production running, and, perhaps most importantly, the significant, specific skill set of the people employed in Akron, he said. Research showed a new factory location elsewhere in Akron would cost too much.

”Clearly, we needed to do something dramatic with the facility,” he said. ”So the question entered my mind, was there a way to fix what was here? I came up with an idea that I thought would work.”

That idea was to build a new factory over the old factory, then tear down the now-enclosed old structures.

And it is panning out.

Pendleton consulted with Crick Construction, which he had learned to trust after working with it on other projects. The 67-year-old Pendleton is familiar with restoring old buildings — he and his family have played prominent roles in restoring historic structures in downtown Warren.

In the summer of 2007, Pendleton and Crick Construction developed a program to rebuild at the current site while trying to avoid major production disruptions.

The work is being done without any government aid, Pendleton said. The Akron economic development team’s programs weren’t applicable to the project, he said.

Months of delays in getting permits from the city pushed demolition and construction into the 2007-08 winter — meaning employees were working in bad, cold weather at times in structures with open walls.

”It was not ideal,” Pendleton said. ”A lot of these guys put up with some really unpleasant conditions. We had made the slum worse. The delay also cost us tens of thousands of dollars.”

The workers who labored under the less-than-ideal conditions performed admirably, Pendleton said. ”I hope that they feel they are respected and well treated. They’ve been terrific. They really have.”

Now the workers can see how the changes are supposed to make things better, he said.

”The thing has emerged from its chrysalis and we have a butterfly,” Pendleton said. ”It’s still a work in progress. We expected from the beginning that this would probably be a three-year project.”

Pendleton said he is delighted with how Ken-Tool’s employees have responded to the project.

”At the beginning, clearly everybody thought I was nuts. A not unreasonable judgment, I might add,” he said. ”But as it has evolved, slowly but surely, people have come to understand the vision. I’ve had people come up to me after a wall was taken down and say, ‘Now I get it. Now I see what you are trying to do here.’ ”

Even though more work needs to be done, it is possible to see a modern, well-lighted, well-ventilated, first-class manufacturing facility, he said. One bonus from the renovations is that employees now have an outside area to eat and socialize on the scenic banks of the Little Cuyahoga.

But this project wasn’t mainly about physical transformations of the building, Pendleton said.