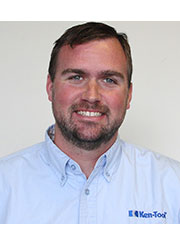 In this new role, Vyn will have the responsibility for complete oversight of Ken-Tool’s sales and marketing functions.

Previously, Vyn held the position of Product Development Specialist since joining the company in 2013, developing new products, and interfaced closely with the Sales & Marketing Department.  Vyn held sales and marketing positions in the steel and heavy-duty manufacturing industries in Northeast Ohio for several years prior to joining Ken-Tool.

Vyn was born in Chicago, Ill., raised in Hudson, Ohio, graduating from Hudson High School.  He received a Bachelor of Science (Psychology) from State University of New York (SUNY) at Brockport, N.Y., and a Masters of Business Administration (M.B.A.) from Baldwin Wallace College in Berea, Ohio.

He is an avid hockey and motorsports enthusiast.  He serves as a USA Hockey official, officiating youth, high school and collegiate level games.  He has competed in national level SCCA autocross events in his 2001 Honda S2000. He also enjoys cruising on, and modifying, his motorcycle.

About Ken-Tool
Ken-Tool is the world’s leading manufacturer of professional automotive and tire service tools. Headquartered in Akron, Ohio, Ken-Tool has been providing the tire industry and automotive aftermarket with quality products for nearly 95 years.